Indian Stars- Click on link below for registration form.   1st to 8th Graders.

Coach Craig Flynn is a 1992 graduate of the Billerica Memorial High School where he was a 3 sport captain in football, basketball, and lacrosse.  He scored over 200 points as a midfielder and attackman for his HS career.  He later attended Division 1 Hofstra University where he played football and lacrosse.  His team won two conference championships and participated in two NCAA D 1 Tournaments.  During his senior season, Hofstra beat #2 North Carolina and #5 Johns Hopkins University for first time in program history.  He was also a North Atlantic Conference All Star during his senior season in 1996.

As a coach of Billerica for 13 seasons, Coach Flynn has guided  his teams to  210 career victories (most in school history) winning 72% of the games, 8 league Championships and won a Division 1 State Championship in 2001.  During his tenure, Coach has assisted over 50 student-athletes attend and play lacrosse at their college of choice, 11 which have played Division 1.  He has also coached 18 All Americans.  He has served as the MVC coaches representative, served on the All America committee, served on the MIAA seeding committee, and on the EMLCA coaching committee.

He currently teaches physical education at the Locke Middle school while also residing in Billerica. 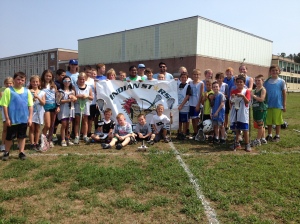